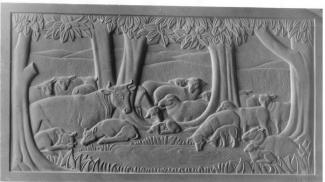 Rosamund Mary Beatrice Fletcher FRBS (1914 – 1993) became an Associate member of the Society in 1945 and a Fellow in 1957, and she also served on the council of the Society. She followed her father, the painter Blandford Fletcher, towards an artistic career. However, her medium was not paint but stone: she was a sculptor working mainly in bas relief and stone lettering. Much of her work depicts stylised plants and animals, such as her 1949 work Pastoral Symphony, which was exhibited at the Royal Academy in 1949. A devoted Roman Catholic, she completed many ecclesiastical commissions such as St. Joseph the Worker and the Holy Child, commissioned by Reverend F. Diamond for St. Teresa’s Church, Risborough, and panels for the reredos in the Lady Chapel of the Carmelite Monastery Church, Quidenham, Norfolk. For the last four years of her life she was cared for by the Franciscan Sisters at Braintree.