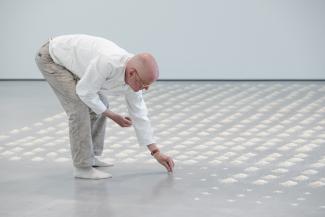 Greville Worthington, Chair of Yorkshire Sculpture Park explores what is an exciting time for both contemporary sculpture and Yorkshire

I feel lucky to have seen such interesting sculpture recently, both close to home, and further afield. I write before having looked at the submissions to the Royal Society of Sculptor’s annual summer exhibition, from which, as this year’s guest selector I will make my selection, but come to this inspired by what I have seen, and in the sure knowledge that contemporary sculpture today is rich, varied and intriguing.

Close to home The Yorkshire Sculpture International has recently opened its doors. A 100-day four venue celebration of sculpture which is hoped to be a triennial event. Yorkshire as the birth-place of Barbara Hepworth, Henry Moore and Damien Hirst has a rich heritage. The collaborative endeavours of The Yorkshire Sculpture Park, the Hepworth in Wakefield, The Henry Moore Institute and the Leeds City art gallery are able to garner this heritage to platform such dynamic displays of sculpture; and importantly foster the study of sculpture.

At the Hepworth in Wakefield the German artist Wolfgang Laib has created a new work entitled ‘Without Space, Without Time, Without Body’, composed of small piles of rice making a field across the whole gallery. The gallery floor acts as a plate on which, in his words, the rice is ‘offered up’. This use of simple natural materials which the artist gathers from the natural world takes his practice into realms of the metaphysical, turning away from the Western Canon and instead inspired by Buddhism and Eastern philosophy, where the raw materials of nature such as beeswax, pollen and rice do the talking. I first discovered his work in the mid 1990’s in his installation at Dean Clough in Halifax as part of the series of artist interventions commissioned by The Henry Moore Institute in The Henry Moore Studio, a vast stone flagged industrial building in the centre of Halifax. Laib made a huge beeswax house, entered through a long wax passageway. Once in and lit by a single lightbulb one felt as close to the rawness of nature as possible. It was a direct experience of closeness with something it was difficult to measure, certainly in words. One felt the smell (if such a thing is possible) and the rawness and directness of the material sobered one into an inner calm. In the words of Donald Kuspit, who wrote on Laib for his 1993 exhibition at Kuntsmuseum in Bonn, ‘Modern Western Society offers no method of contemplation and has no sense of its significance, which is why Laib repudiates and retreats from it to the inner sanctum of his art’. And we are taken too, to a place where the extracted materials of nature are offered back to us.

When thinking of sculpture one can’t help but look for connections, however tenuous. It may seem an odd comparison by the installation ‘The Asset Strippers’ currently at Tate Britain by Mike Nelson shares with Wolfgang Laib the acts (sculptural acts?) of sourcing, placing and contemplation.

Nelson turns the Duveen galleries into a sculpture court filled with the decrepit redundant machinery of a lost age. These machines from various industries, different factories and obsolete farming practises were gathered by Nelson from internet auction sites over a six month period. The show, which continues until 6 October, is part sculpture gallery, part redundant machinery warehouse, but as you wander around trying to see these objects as sculpture, strange things happen. Whilst Laib gathers from raw nature, Nelson trawls internet sites of liquidation auctions of the post-industrial era. As sculpture they seem to hold their own, mimicking a grand sculpture court as might be found in the V&A or British Museum. The sense of otherness, past life and decrepitude is however plain to see. Not quite beyond repair, they lie asleep having been retired from active service through a redundancy of purpose as the fabricating base of the UK is unpicked and thinned out.

They shout of a magnificence and a surety of purpose to be able to deliver the goods. The heavy end of the factory floor now becomes a place of contemplation and in some places machines are caught mid task, with their product daintily affixed to their mother machine. Cheap tacky jewellery drapes from the machine that made them, and we see the last of the manufacturing run, suddenly stopped mid-task as the realities of cost-based production and the inevitability of moving production elsewhere.

What might seem an elegy to industrial heritage does however hold up in offering a sculptural experience. Although ‘object trouve’ thoughts of the canon of western modernist sculpture buzz about. From Louise Bourgeois to Lynn Chadwick, Henry Moore and Barbara Hepworth.

A comparison can be made with the totem standing sculptors of David Smith, currently on show at The Yorkshire Sculpture Park, also part of the Yorkshire Sculpture International. Smith welded steel and iron, drawing influences from the whole gambit of European Modernism from Giacometti, Julio Gonzalez to Picasso. The exhibition draws together for the first time in this country since the Tate Modern Retrospective in 2005 his seminal works, many on loan from overseas museums. Some works look strangely like the machines of the Industrial Age as gathered from redundancy by Mike Nelson. As David Smith said, ‘art cannot be divorced from place or science’ he forged an art deftly negotiating the memory of place with the materials available, skirting with the legacies of Surrealism, almost painting in air with the welded line. A key influence was (shared with Laib) Eastern religions with roots in the myths of place, of losing a sense of time in a gathering of the impulses where man, machine and the natural world collide. And the images are hard won, grafted in the machine shop/studio, where the heavy machinery cut, chopped, forged and welded the works. Even in the heaviest iron bulk of some of the sculptures there is a lightness of touch, as if like a miracle of production. Something I feel Mike Nelson was suggesting in the production possibilities of the machines in The Duveen Galleries Of Tate Britain.

I attended recently a talk given by the British Sculptor Nigel Hall, who I had asked to place a work on the forecourt of Dora House for the Summer exhibition. At his talk at the Said Business School in Oxford, where some of his sculptures are shown, he spoke of the origins of his work as distilled memories of place, particularly of his visit to a dry lake in America where he dropped a pebble down an abandoned pipe emerging from the dried-up lake bottom. The resulting artwork condensed this memory perfectly, with all the key ingredients of the place, the memory and the action invested in the finished form. As such he seems the perfect choice to mediate between the made and found, the natural and man-made worlds and the spiritual and present in sculpture today.

The summer exhibition opens at the Royal Society of Sculptors, Dora House on 22 July.