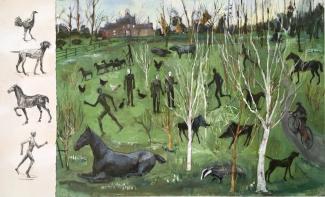 My first encounter with Elisabeth Frink’s work was an image of a horse in the downstairs toilet at a neighbours house. I went home and made a drawing on a large blackboard in white chalk. My father took a photograph of it. Of course, my unconscious chalk homage to Elisabeth Frink was nothing special, neither was it anything like the original I now realise! However, what is undeniably special is the energy and spirit conveyed second or third hand via the reproduction of a lithograph print on a poster in a downstairs loo, that inspired a 7yr old to make an ‘artwork’.

35 years later I was invited by Michael Morpurgo, with whom I had previously worked on a number of projects, to illustrate his new book ‘Muck and Magic’, the story of a young girl who meets and is inspired by an older woman artist. I was delighted to discover that this character was based on Elisabeth Frink, giving me the chance to pay homage to her once more!

While working on the book, talking about Frink, I was surprised to find that her name and work seem less familiar to some people than the other great artists of the 20th century, and it made me wonder why, since for me she was there in the background of my life since a very early age. So I hope that this new publication by Walker Books will help introduce her work to a generation of young readers.

Like the girl in the story, I have been lucky enough to have had some inspiring figures in my life who helped me to become a practising artist, and this book is dedicated to three of those people.