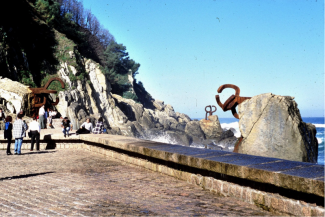 by Eduardo Chillida in San Sebastian

Leaving the Mirakontxa Pasealekus, I enter the promenade and walk in a westerly direction, the promenade narrows and in the distance I see El Peine de los Vientos; suddenly rock outcrops obscure the view and instead, deep visceral sounds are felt and heard.

Continuing, the promenade leads to a granite paved concourse, the site of El Peine de los Vientos. In the foreground seven granite slabs project above the  paving, all have holes extending into the cave beneath which has become a bellows, where air, compressed by incoming waves is forced up through these seven holes.

Seven holes and seven sounds for the seven Basque provinces, prescient symbolism indeed! To the left, the only easily accessible Peine projects from the rock, as if grasping the air around it. Meanwhile, the Peine on the right seems to be in perpetual motion. Fixed to a rock, it rises at a perilous angle and glistens in the sunlight as waves wet its surface. The central Peine is distant and inaccessible, being vertical and fixed to the rock beneath, it has a composure and stasis, that is in sharp contrast to the grasping projections of the Peines on either side.

For me, the dynamic forms of El Peine de los Vientos and the meaningful interaction of the sculpture with the environment, makes it one of the most profound sculptures of the last century?

Andrew Stoyner is a fellow of the Society.