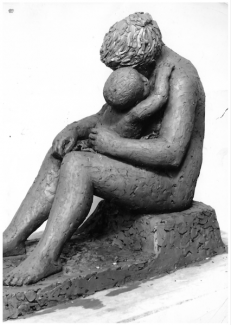 Karin Jonzen FRBS (1914-1998) was born in London of Swedish parents. She studied sculpture at the Slade under A. H. Gerrard. Despite Gerrard’s dislike of Greek sculpture, steering his students instead to Ancient Egyptian works, Jonzen became inspired by the sculpture of Ancient Greece upon visits to the British Museum. After three years at the Slade, she studied at the City and Guilds Art School in Kennington. Here, she devoted her time to stone carving: a material she would work with throughout her career. During the Second World War, she worked as an ambulance driver at Spitalfields, but was invalided out with rheumatic fever. After bombing raids, Jonzen collected stone debris from the streets, taking the stone back to her garage to carve.

Her work was figurative, producing many female nudes such as Europa and the bull (1948), Reclining Figure (1949) and Sandra (1961). She also produced portrait busts of Malcolm Muggeridge, Sir Hugh Casson and Sir Alan Herbert. After the Second World War, her relatable, figurative work suited the mood of the time and she received commissions for works installed within the rebuilt schools and housing being constructed throughout the country.

Jonzen had work on display at the South Bank of the 1951 Festival of Britain: her work fitting perfectly with the post-war ‘art for the people’ ethos.