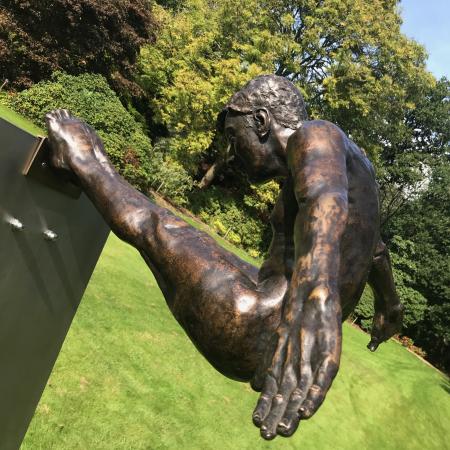 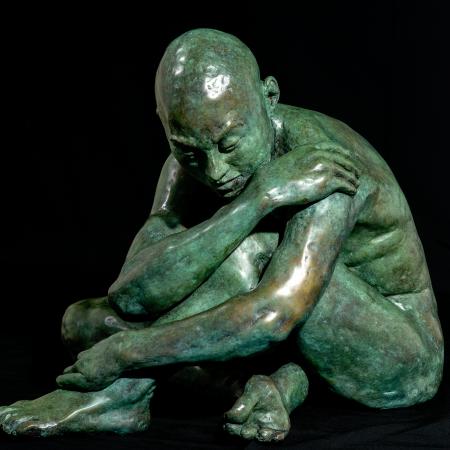 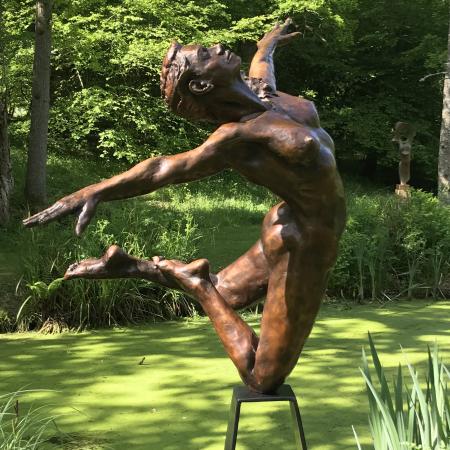 Teresa Wells creates emotive figurative sculptures in bronze, that celebrate man’s physical and emotional survival over adversity. Inspired by the question “How do Humans Behave”, she draws inspiration from the contours of athletes and ballet dancers to emphasise a physical strength, placing them in precarious poses to stress fragility.

She employs an illustrative style that pertains to theatrical gesturing, with particular attention made in re creating detail in the face, hands and feet. This creates a powerful and spiritual force, creating reflection on one’s own psyche. When combined with geometric architectural supports, in steel and stone, she shows a contemporary approach to bronze, lifting it off the the plinth and making it appear less monumental and traditional.

Graduating from Loughborough University with a MA in Fine Art and Design, in 2007, she was awarded a grant enabling her to produce her first solo show and establish a studio at Harborough Magna in the Midlands.

A skilled maker, she understands the bronze casting process first hand, after taking up an eight month residency in Shropshire, culminating in her producing the highly successful “I Spirit”, recently installed opposite Tate Britain.

A capable project manager, she is experienced in collaborating with mechanical and structural engineers, to safely install both private and public works of art, more recently at The Rootstein Hopkins Parade Ground, Chelsea School of Arts. She has a successful track record working with interior designers in the Midlands and Shropshire, to commission and brief.

Previous collections, which include her figurative tableaux installations, have featured in numerous group exhibitions both nationally and internationally. Receiving critical acclaim in several publications and on line art platforms, she has also received numerous awards, and is a member of The Royal Society of Sculptors.

In addition she has curated six solo shows of her work and has sold pieces through SAATCHI, BLOCC Interiors (formerly Connections in Design Ltd), Inside Right Ltd and AK Designs, Shropshire. More recently she appeared on BBC 1 Home is Where the Art Is and was commissioned by BBC 1 and Netflix to produce a piece of sculpture for the hit series Dracula.