Born in 1928, Kaufman in her long career has completed many public commissions in England and in Africa. She has exhibited at the Royal Academy Summer exhibition and the Royal Society of Portrait Sculptors, to which she was elected as a Fellow in 1975. 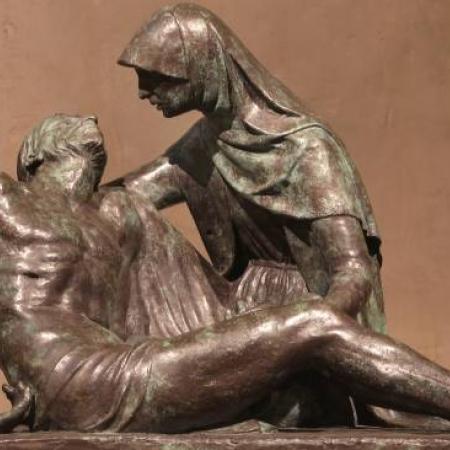 Kaufman attended Bournemouth College of Art and then spent a further three years studying sculpture at the Royal Academy Schools in London before winning the Gold Medal for Sculpture and a Travelling Scholarship in 1950. The scholarship allowed her to study in Greece and work at the British School of Archaeology in Athens.

In 1953 Kaufman completed a sculpture of of St Francis of Assisi in Portland stone for her former school, the Convent of the Cross in Boscombe. In 1955 Kaufman travelled to Bulawayo in Zimbabwe (then Southern Rhodesia) to visit her sister, Jeanne Hudleston, who had settled there. After teaching art for a short while at Townsend High School, she married Bulawayo businessman Basil Kaufman, and settled in Bulawayo permanently.

Among the many public works Kaufman has completed in Africa is a massive sculpture cast in fibreglass which adorns the side of Pioneer House in Fife Street, Bulawayo. She has also completed numerous commissions for portrait busts as well as other large commissioned pieces in Zimbabwe and South Africa. She continues to create occasional commissioned sculptures and painted portraits.