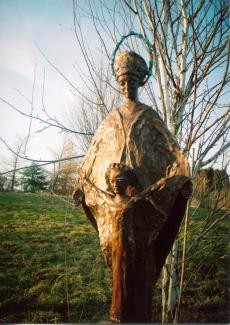 Janet Scrymgeour-Wedderburn FRSS is a retired member of the Royal Society of Sculptors that she joined in 1975, becoming a Fellow in 1980.

Janet worked primarily as a sculptor as well as a stained glass designer. After attending Convent of the Sacred Heart, Bridge of Earn, Perthshire, she studied with the sculptor Alastair Ross PVPRSS in the early 1970s and received a number of awards including Royal Scottish Academy’s Benno Schotz Prize in 1973. She showed her work regularly, notably at Royal Scottish Academy and at the Paris Salon.