John Bunting was a noted sculptor and engraver and a key figure at Ampleforth College and Abbey in North Yorkshire. His work is infused with the religious ideals that inspired him. Wrought in stone and wood, his sculptures were deliberately crude and primitive. In his early days he had embraced modernism but he later rejected it in favour of the pre-Renaissance tradition of craftsmanship.  The main body of Bunting's work is in the North of England, much of it commissioned by the monastery and school. However, his most enduring monument is the multi-denominational Scotch Corner Chapel on the edge of the North Yorkshire Moors National Park. 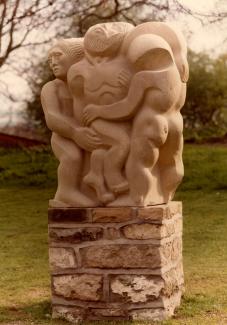 Bunting combined sculpture with his role as the drawing and art master at Ampleforth where, for some 40 years, he inspired the likes of portraitist Andrew Festing as well as Anthony Gormley, who recalls, "I can still remember . . . those drawing classes. We'd clear out the desks, and he'd set up something for us to draw. There was such an atmosphere of concentration and silence: a group of 10 people in a half-circle around this thing, and John quietly going from one to the other. It was a real gift to be allowed to spend protracted time looking."

First and foremost though, Bunting was a sculptor. His figures were simple - almost always celebrating Christian themes such as the lives of the saints, the Madonna and Child, and the Stations of the Cross - but they express such life, twisting, writhing and cavorting in dramatic portrayals of human suffering and love. 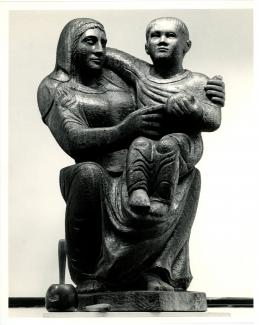 The inspiration for the chapel came in 1955 when Bunting travelled to Beni-Abbes, in the Sahara Desert, to see the buildings and chapel that the missionary Charles de Foucauld had erected there. In 1957, Bunting painstakingly converted a derelict  barn into a memorial dedicated to four Old Amplefordians who had died at war. He carved one of his best-known pieces, The Soldier, a recumbent figure wearing a paratrooper's helmet. The sculpture was a representation of Hugh Dormer who died in Normandy in 1944. Bunting described the monument as his attempt at repayment "on a debt that cannot be repaid.”

Born the son of a tea broker in London on August 3 1927, Bunting attended the Benedictine prep school of St Augustine's at Ramsgate, before he was evacuated to Yorkshire and sent to the Benedictine Monastic School at Ampleforth College. Here he became entranced with the finely carved mice that adorned the robust furniture. Discovering it was the work of Robert “Mousey” Thompson, he visited the nearby workshop in Kilburn and was enthralled “by the smells of oak and leather and beeswax - by the sight of men working, carving and assembling pieces of furniture.” 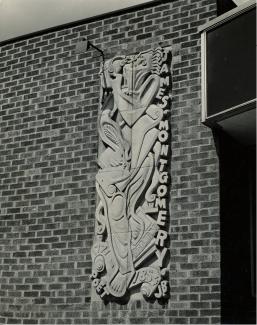 On leaving school in 1944, Bunting spent three months working for Thompson and returned in 1948 for a 12-month apprenticeship, following National Service in the Royal Marines. He then took the advice of Henry Moore and studied at St Martin’s and subsequently, in 1950, the Royal College of Art. He came to know the work of Leon Underwood, who blended contemporary sculpture from across continents. The two men became friends, with Underwood having a profound influence on Bunting’s work.

After his studies, Bunting travelled around Europe. He received his first commission in 1951 and by the mid-1950s was increasingly sought after as a church sculptor, with his work ranging from whole figures to reliefs, inscriptions and carvings. In 1955 he was appointed drawing master at his old school, and 29 years later he became sculptor-in-residence, continuing to work for the school until 1987. Even after retirement he produced more than 100 new works.

Bunting made numerous sculptures for the school and the abbey, including the St Benedict above the entrance door of the monastery which celebrates the 1500th anniversary of the saint's birth. 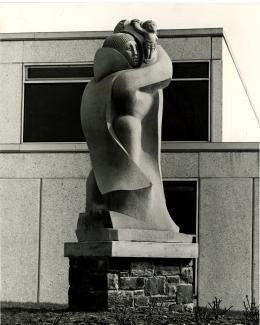 John Bunting married Romola Farquharson in 1956, with whom he had two sons and three daughters, prior to separating in 1978. His archive is held by The John Bunting Foundation and the Henry Moore Institute.