The Royal Society of Sculptors has grown substantially since it was first founded in 1905, going from a membership of 51 to almost 700. The majority of our members make a lifetime commitment to the Society, and we are delighted to celebrate four Fellows in 2021 who have been with us for 50 years!

Dennis Huntley is a British sculptor, furniture designer and author. A Member of the Royal British Society of Sculptors since 1963 (and a Fellow since 1970), he has completed works for cathedrals, individual collectors and other organisations. Among his most notable works are his sculptures for Guildford Cathedral.

Huntley studied at Wimbledon School of Art and London University. For several years, he was the Head of the Sir John Cass School of Art. He has broadcast on sculpture for BBC One and Thames Television, and authored the book Modelling and Sculpture in 1976.

In 1967, Huntley's statue of Anne Boleyn in Carshalton was awarded the Sir Otto Beit Medal. The sculpture was officially unveiled by the 2nd Baron Astor of Hever Castle in Kent (where Anne Boleyn and her family once lived) in 1967.

Among Dennis' most notable works are his sculptures for Guildford Cathedral - his Clipsham stone figures include St Cecilia, Lady Margaret Beaufort, St Hubert and a representation of piety. 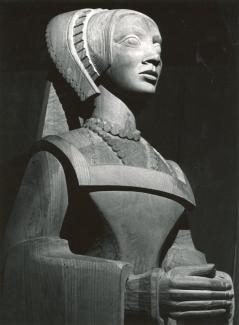