The Royal Society of Sculptors is showcasing the work of Naomi Blake FRBS with an outdoor exhibition on its sculpture terrace which is free for all to enjoy. The exhibition celebrates Blake as part of the Society’s ‘Pioneering Women’ project, which shines a spotlight on the lives, careers and legacies of the talented and extraordinary women at the heart of the organisation.

“Naomi Blake was a Fellow of the Society and her story really is one of the most extraordinary. After surviving Auschwitz and escaping a Nazi death march, she started a new life in Palestine and was involved in Israel’s war of independence. It was during her recovery from a shot wound that she started to carve an olive branch and commenced her awe-inspiring journey as a sculptor.

Blake’s sculptures symbolise hope and optimism in the face of adversity, a message which surely resonates with us all at the moment. We’re showing her work on our open sculpture terrace on South Kensington Road so that everyone has the chance to enjoy viewing them.” 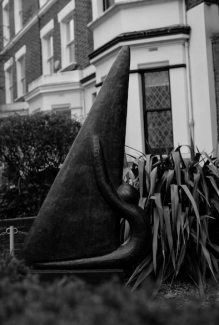 The works on display are:

The works are kindly loaned by Blake’s children, Jonathan Blake and Anita Peleg;

"Our mother’s work is a subconscious expression of her experiences, through abstract and semi figurative forms.  Many of her pieces often contain a figure, often protected but later standing free. She said “there is something positive in the human figure – there’s a lot of good in people”, quite a remarkable thing to say after what she survived".

The opening of Blake’s exhibition coincides with Women’s History Month and follows the Society’s ‘Pioneering Women’ Conference. Held online on 10 March, the Conference explored how female sculptors trained, practised and forged careers within the typically male field of sculpture. The Pioneering Women project has been funded by the Paul Mellon Centre for Studies in British Art. 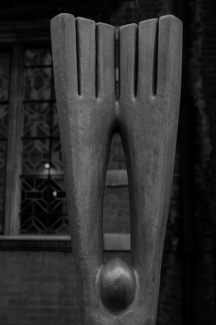