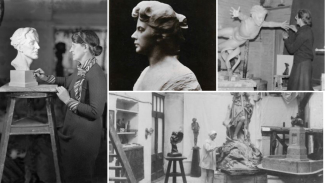 For the last two years, the Royal Society of Sculptors has undertaken the research project, ‘Pioneering Women at the Heart of the Royal Society of Sculptors’, funded by the Paul Mellon Centre. This research has used the Society’s archive to uncover the lives, histories and careers of twenty-five female sculptors working in the early to mid-twentieth century. The archive reveals these women’s professional lives and networks: for instance, these women often nominated other female sculptors for membership.

The Royal Society of Sculptors was formed in 1905 and women were officially able to become members from 1910. However, the first women were not elected until 1922, with the election of Lady Feodora Gleichen MRBS 1861-1922 (posthumously), Flora Kendrick FRBS 1880-1969 and Christine Gregory FRBS 1879-1962. This conference will expand on the work carried out for the Pioneering Women project to explore how female sculptors trained, practised and forged careers within the typically male field of sculpture.

We invite papers of no more than 20 minutes in length to be delivered online. These may be pre-recorded or delivered live, with panellists then taking part in questions and discussions live. We also intend to publish the papers in a special journal edition.

We are particularly interested, though not exclusively, in papers about the following sculptors who feature in the ‘Pioneering Women’ project research: