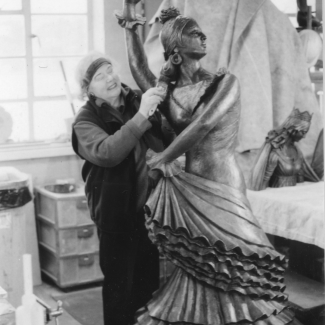 Sheila Mary Mitchell FRBS (1926-2006) displayed talent early in her life, exhibiting at the Royal Academy in 1945, aged only eighteen. She then went on to train at Guildford School of Art under Willi Soukop, who later supported her application for membership to the Royal Society of Sculptors. After Guildford, she studied Sculpture at the Royal College of Art from 1948 to 1951 under Frank Dobson, John Skeaping and Edward Folkard, with assistance of a grant from Surrey County Council. Mitchell married a fellow student from Farnham and the Royal College of Art, the painter Charles Bone, in 1951. The pair settled in Surrey in a home with studios for the both of them, and they exhibited together throughout their careers.

Mitchell became an Associate member of the Society in 1970 and a Fellow in 1975. Predominantly a figurative sculptor, Mitchell worked in bronze and terracotta, but also produced ceramic pieces for the Royal Worcester Company.  As well as being involved with the Society, she was also involved with the Society of Portrait Sculptors, becoming its President from 1978 to 1983. She produced over 150 portrait sculptures, and her sitters included the Duchess of Kent and Sebastian Coe. Her public sculptures include a bronze of the social reformer William Cobbett in Mitchell’s home-town of Farnham, Surrey. 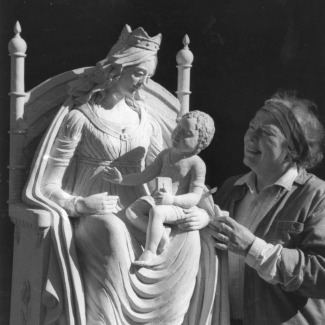