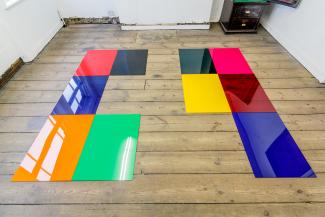 The Line collaborates with the Royal Society of Sculptors to launch Conversation In Colour.

London City Island, the new creative and cultural neighbourhood on Leamouth Peninsula, will host a brand new exhibition for Frieze London. Curated by the Royal Society of Sculptors, the exhibition will showcase new specially commissioned, site-specific work from two of the UK’s most exciting contemporary artists. The exhibition marks The Line’s first collaboration with arebyte Gallery and anticipates its long-term residency at London City Island as The Line extends its programme of outdoor sculpture to include the plinths at Botanic Square in spring 2019.

Conversation in Colour brings together painter, Paul Huxley RA and a young sculptor, Holly Rowan Hesson for the first time. While working in different media, they both use planes of colour to create visual riddles in their work. Huxley will create two new canvasses for the show which will be juxtaposed with installation work by Hesson. Visitors are invited to take part in the dialogue that is contained in the artists' work.

Future home to English National Ballet and London Film School, London City Island is a landmark development with culture and creativity at its core. The theme of the exhibition is in keeping with the bold lines and colour that define London City Island. The hues of its buildings replicate pigments that were commonplace throughout the area’s rich maritime history. The distinctive ‘Faraday Cage’ pattern, found throughout the island, is further evidence of this commitment to colour and is taken from the Trinity Buoy Wharf lighthouse, which was used by electrical scientist Michael Faraday for his pioneering experiments.

Conversation In Colour seeks to reflect the Royal Society of Sculptors’ new mission statement to support and connect sculptors of all ages and experience, while leading conversations about sculpture through accessible events and shows.

Frieze weekend (6 and 7 October) only:

Ahead of viewing Conversation in Colour, visitors are encouraged to walk the full length of The Line from North Greenwich to view works by Alex Chinneck, Thomson & Craighead, Richard Wilson, Gary Hume and Antony Gormley. Predator - the dedicated 10-person boat service which runs from The O2 QEII Pier to Trinity Buoy Wharf Jubilee Pier - will take visitors to the north side of the Thames where they can explore Trinity Buoy Wharf, home to London's only lighthouse, before walking up to arebyte Gallery at London City Island.

Saturday 6 and Sunday 7 (only) The Line will be running a free boat service every 20 minutes (11.30-6.30pm) from The O2 QEII Pier at North Greenwich to Trinity Buoy Wharf Jubilee Pier (capacity 10 people). It’s then a 10 minute walk to arebyte Gallery. NB. arebyte is accessible from Canning Town station (Jubilee Line) at all times.

Paul Huxley RA will be in conversation with Holly Rowan Hesson at arebyte Gallery, chaired by Caroline Worthington.

London City Island will comprise 1,700 new homes set on an island of 12 acres, with independent artisan restaurants, shops, creative hubs and al fresco spaces. The development takes its inspiration from the area’s maritime heritage, with bold primary colours and making use of its waterside surroundings with river walkways. Additionally, all Island residents will become members of the City Island Arts Club, the island’s own private residents’ club which includes a striking red swimming pool of bright, seafaring red tiles - the trademark hue which appears throughout the island. Phase one, developed by Ballymore, is now complete and fully occupied, Phase two by EcoWorld Ballymore is currently under construction.

The Line is London's first dedicated contemporary art walk and opened in May 2015. The route currently runs between the Queen Elizabeth Olympic Park and The O2, following the waterways and the line of the Meridian. Sculptures - by artists including Damien Hirst, Gary Hume and Thomas J Price - are set against the ever-changing backdrop of east London. The Line aims to encourage people to engage with contemporary art and the urban environment, as well as to learn about the area’s local history, wildlife and heritage. www.the-line.org

About The Royal Society of Sculptors:

The Royal Society of Sculptors was created over 100 years ago to advocate sculpture and the artists who create it. It welcomes visitors to its historic home in South Kensington to explore a diverse range of contemporary work through original exhibitions, artists' talks and creative workshops. The Royal Society of Sculptors is based at 108 Old Brompton Road, London, SW7 3RA. Nearest tube stations: South Kensington & Gloucester Road.

arebyte is a London-based art organisation which supports the development of contemporary artists working across emerging artforms. Through our gallery space and affordable studio complex, we create thriving environments for artists to expand on their practices, explore collaborative working and meet new audiences.

Since its inception in 2013, our exhibition space dedicated to new media and performance art nurtures digital and participatory artforms through interdisciplinary dialogues. We commission cutting edge artists who bring new perspectives to digital culture by connecting emerging technology and art practices, and we curate participatory performance work by artists who push the boundaries of collaborative art-making.

Our artistic programme provides empowering art experiences to local communities, art practitioners, academics as well as the broader creative and tech sector. With 4,500 visitors per year, arebyte Gallery is an inspiring place for everyone.

Paul Huxley’s work first came to prominence in the New Generation at the Whitechapel Art Gallery in 1963 and he has since exhibited widely in the UK, America and the Far East. He lived in New York for two years in the mid 1960s on a Harkness Fellowship and was later a Trustee of the Tate for seven years, Professor of painting at the Royal College of Art for twelve years and Treasurer at the Royal Academy of Arts for fourteen years. His recent solo exhibitions include; in 2015 a room as part of the Azerbaijan International Pavilion in the Venice Biennale, in 2016 a show of recent painting and sculpture at the Mark Richard Gallery, Santa Fé, New Mexico and also in 2016 a retrospective at the Mark Rothko Centre, Daugavpils, Latvia, Rothko’s birthplace.

Holly Rowan Hesson has exhibited in solo and group shows nationally over the last five years. Recent solo exhibitions include Echo, commissioned by Warrington Contemporary Arts Festival in 2017, New Work at & Model, Leeds in 2016 and Assembly at Bankley Gallery, Manchester in 2016 which was awarded after winning the Bankley Gallery Open. Hesson was awarded a micro-commission to make new work by The Art House, Wakefield in 2018, invited to exhibit in the inaugural Coventry Biennial of Contemporary Art in 2017 and in 2015 she was presented by Castlefield Gallery at The Manchester Contemporary. Hesson was awarded Arts Council England research and development funding in 2017 and 2015. In 2013 she received a practice-based MA in Contemporary Fine Art with Distinction from University of Salford.