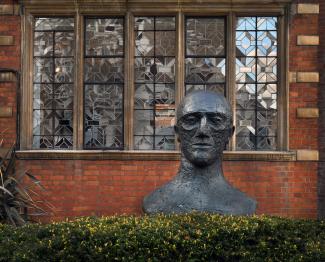 Portrait of a Profession, An Exhibition of Photographs by Anne Purkiss

Faces of Sculpture is an exhibition of photographer Anne Purkiss’ portraits of leading British sculptors in their studios taken over the past 30 years.

As a photo-journalist Anne arrived in the UK from former East Germany in 1984. Two years later she got her first commission to photograph a sculptor in his studio. The job came from the Associated Press and the pictures were to be a celebration of the 90th birthday of Arthur Fleischmann. This was the start of a three-decade project that has seen her taking portraits of more than one hundred sculptors who inspire her through their work and ideas.

Dame Elisabeth Frink, who was a Fellow of the Royal Society of Sculptors, is captured in her Dorset studio in 1990 - just prior to her 60th birthday - sat alongside the sculpture Seated Figure II. The exhibition – which coincides with the 25th anniversary of her death – will also feature her monumental sculpture In Memoriam III (1983). The work is on loan from the Ingram Collection of Modern British Art and will be displayed on the Sculpture Terrace outside the venue.

Sir Tony Cragg is seen in his studio in Wuppertal, Germany, preparing for his 2017 Yorkshire Sculpture Park exhibition. Martin Creed is outside the entrance to the Barbican in London’s Silk Street (near his office). David Nash is seen chain sawing a large wooden sculpture, with the scenic backdrop of the rugged Blaenau Ffestiniog landscape. Lynn Chadwick is in the grounds of his home in Lypiatt Park, Gloucestershire…..

In addition, the work of four contemporary sculptors - Rana Begum, Simon Hitchens FRBS, Michael Lyons FRBS and Cathie Pilkington RA - will accompany photographs of the artists in the exhibition space at The Royal Society of Sculptors in Old Brompton Road, London.

Anne says “It’s an exciting time to photograph sculptors and their work as in recent years the nature of an entire profession has changed. It is fascinating to see how much our understanding of this artform has been transformed within a few decades. Sculpture is no longer just a piece of artwork on a plinth, it includes installations, site specific or performance art. Sculptors use increasingly unconventional materials. And there are many more women working in sculpture now and producing inspiring work. As a photographer, the subject has huge creative potential for me, it appeals to my interest in documenting people and change.”

Caroline Worthington, Director of the Royal Society of Sculptors says “We are thrilled to have this chance to display Anne’s three decade exploration of what it is to be a sculptor. We are especially pleased to have an opportunity to display some of the sculpture created by a number of those artists featured in her insightful photographs, alongside their portraits. Sculpture is an ever evolving art form and we think visitors will find it fascinating to see this development captured through images of some of its leading practitioners taken over the last 30 years. It is especially fitting we are holding this exhibition in our South Kensington ‘home’ of Dora House, as it was once a photography studio for Elliott and Fry.”

The exhibition, which forms part of RA250 celebrations, coincides with the release of Purkiss’ new book SCULPTORS 1986 – 2016, featuring among others members of the Society and Royal Academicians

Anne-was born in Chemnitz, Germany and graduated from Leipzig University with a degree in Journalism and Photography. She worked for an advertising agency before moving to England in 1984. After four years at the London bureau of Associated Press, she became a freelance photographer. Her commissions include regular work for government agencies, museums and galleries and her photographs have been published in national and international newspapers such as The Guardian, The New York Times, Die Zeit and Nature. Purkiss’ photographs are held in a number of public collections, including the National Portrait Gallery, the Royal Academy library and the archive of the Royal Society London and the National Art library. Her work has been exhibited in England, Germany, Italy and Switzerland. More at www.purkiss-images.eu  / Twitter @annepurkiss

Faces of Sculpture: Portrait of a Profession, An Exhibition of Photographs by Anne Purkiss is open Monday to Friday 11am – 5pm & Saturdays 12 – 5pm. Entry free.