The Line is London’s first dedicated public art walk. Connecting three boroughs (Newham,Tower Hamlets and Greenwich) and following the Greenwich Meridian, it runs between the Queen Elizabeth Olympic Park and The O2. The Line features an evolving programme of art installations (loans and commissioned works), projects and events, illuminating an inspiring landscape where everyone can explore art, nature and heritage for free.

Laura Ford’s sculptures present a complex interplay between vulnerability and menace. She uses humour and an acute observation of the human condition to engage with wider social and political issues. Bird Boy is a figure of a lost child wearing a bird costume, which could appear as a protective disguise or a demonic curse. Standing motionless on the edge of a pontoon in the Royal Docks, Bird Boy hopes he will go unnoticed but, despite his scale, his presence is powerful and commands attention.

Alex Chinneck MRSS // A Bullet from a Shooting Star, 2015

Produced in collaboration with Greenwich Peninsula and the London Design Festival,  A Bullet from a Shooting Star  is an ambitious outdoor sculpture by British artist Alex Chinneck (b.1984). The work takes the form of an upside down electricity pylon, balancing on its tip, leaning at a precarious angle as though shot to earth from the sky. At 35 metres tall, the structure is composed of 466 pieces of steel with a combined length of 1,186 metres. Over 1,000 engineered connection points and 25-metre-deep foundations have been used to anchor the 15 tonne structure. Greenwich Peninsula was once home to the largest oil and gas works in Europe and the pylon looks to evoke this industrial history of power generation and supply. The latticed steelwork reflects the visual and material language of multiple structures on the Peninsula, particularly the neighbouring redundant gas tower and the tilting structural elements of the Millennium Dome (The O2). Illuminated at night, the sculpture projects a maze of latticed light. 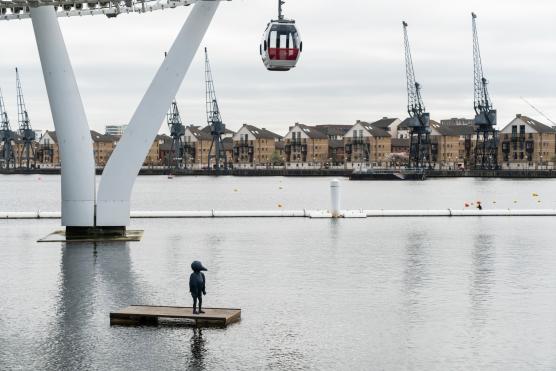