Rose Gwynneth Holt FRBS (1909-1995) is shown here working on West Wind, a replacement for a figure from the Joy of Life fountain in Hyde Park sculpted by her first husband, the sculptor Thomas Bayliss Huxley-Jones FRBS, and damaged after his death.

Born in West Bromwich, Holt trained at Wolverhampton School of Art and then the Royal College of Art under Richard Garbe HFRBS. It was at Wolverhampton that she met her husband, Huxley-Jones, and they married in 1934.

Holt became an Associate of the Royal Society of Sculptors in 1943, nominated by Charles Wheeler PRBS and Robert Jackson Emerson FRBS, and was elected a Fellow in 1952. She was an active member of the Society, serving on the Council and nominating new members. She was elected onto the Council of the Royal Society of Sculptors in 1954 and served for three years until 1957. She and her husband Huxley-Jones (a member of the Society since 1938) nominated Albert Willetts ARBS for membership of the Society in 1950. 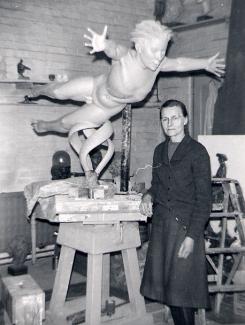 Holt completed many works with a religious theme, or  for ecclesiastical buildings, such as His Holiness Pope John XXIII (below), Hands, The Resurrection and Mother and Child. She completed commissions for the 1962 pulpit of St. Andrew’s Church in Hornchurch, Essex (left); the chapel of the East Mission in Stepney and the limewood The Immaculate Conception for the Church of the Immaculate Conception in Chelmsford.

It was for her work in ivory, however, that Holt was most celebrated as a sculptor, and her ivory sculpture Annunciation (1946) received particular praise for her carving skills. Annunciation depicts the Virgin Mary, her palms raised to God, with Gabriel depicted beneath her feet. In 1948, Holt was awarded the Feodora Gleichen award for 'outstanding work by a woman sculptor' for her ivory statuette Mother and Child, exhibited at the Royal Academy of Arts. In the 1972 book Modern Ivory Carving, Holt was described as ‘Britain’s foremost ivory carver’. A validation of her great skill as an ivory carver, her teacher at the Royal College of Art, Richard Garbe HFRBS, reputedly gave her his ivory carving tools upon his retirement 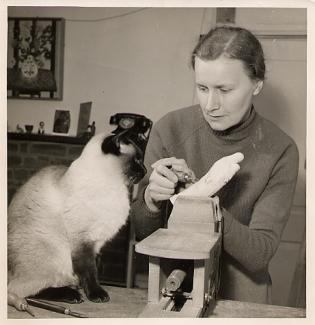