Naomi Blake FRBS (1924-2018) became an Associate member of the Society in 1979 and a Fellow in 1993. Born in Czechoslovakia in 1924 into a large Jewish family, she spent the last nine months of the war in Auschwitz. During a march through a forest, she escaped with friends whilst being shot at. Her sculptures were motivated by both a desire to commemorate the past and the promotion of understanding between people of different faiths.

Blake was interested in Jewish life, learning and culture, and many of her works are of Old Testament figures, such as her sculptures Saul, Joseph and Moses. Many of her sculptures give the impression of shelter, or protection, often featuring an enclosed figure. She exhibited widely including at The Society of Portrait Sculptors in 1962 and 1965, and the Amnesty Sculpture Exhibition of 1979. She produced many public works such as Liberation (1977) at the Institute of Education, Abraham and Isaac (1987) at Carmel College, Wallingford, Oxfordshire, and Sanctuary (1985) at St. Botolph’s Church, Aldgate, London. She donated two of her sculptures, Abandoned and Memorial to the six million to The National Holocaust Centre and Museum in Nottinghamshire.

Blake was concerned that her works ‘spoke’ and that no further explanation was necessary, saying, “don’t talk sculpture, sculpt”. 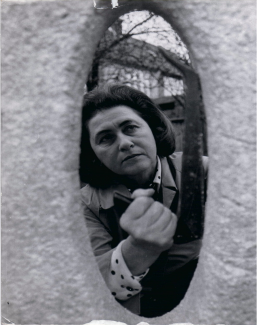