Karin Jonzen FRBS (1914-1998) was born in London of Swedish parents. She studied sculpture at the Slade under A. H. Gerrard. Despite Gerrard’s dislike of Greek sculpture, steering his students instead to Ancient Egyptian works, Jonzen became inspired by the sculpture of Ancient Greece upon visits to the British Museum. After three years at the Slade, she studied at the City and Guilds Art School in Kennington. Here, she devoted her time to stone carving: a material she would work with throughout her career.

During the Second World War, she worked as an ambulance driver at Spitalfields, but was invalided out with rheumatic fever. After bombing raids, Jonzen collected stone debris from the streets, taking the stone back to her garage to carve. 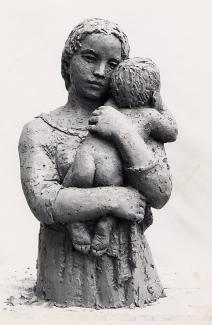 During the Second World War Jonzen joined the Civil Defence and became an ambulance driver. In 1948 she won the Feodora Gleichen Award for the best woman sculptor and was included in Herbert Read’s Contemporary British Art 1951. Her work was also featured in Eric Newton’s book, British Sculpture 1944-46, in which he wrote as follows of stylistic differences:

“Nonetheless, these sculptors can be conveniently divided into stylistic groups, according to their starting points. There are, for example, the devotees of pure form, led by Barbara Hepworth: there are the artists who have been inspired by Henry Moore’s noble fusion of human form with exciting anatomy of bones and caverns and mountains: there are the classic sculptors like Frank Dobson and Karin Jonzen and Dora Gordine who have by-passed the Italian Renaissance and gone back to the source of European Classicism, the Golden Age of Greece, and there are the complete traditionalists.” 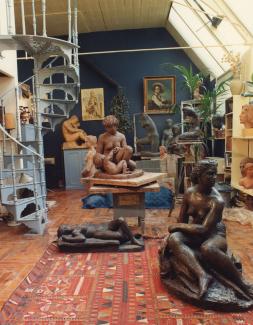 In 1963 Jonzen received a Leverhulme Research Grant for three months of study in Italy and Greece. She was commissioned by the Ministry of Health to do a figure of a youth for the World Health Organisation building in New Delhi and a female torso for the new World Health Organisation building in Geneva. Commissions became few and far between afterwards, but Jonzen gave lectures on abstract art and taught sculpture at Camden Arts Centre. In 1968 she exhibited three works for the City of London Festival. She said about her sculpture:

“That the figures resemble each other in feature and form, whether they were effortlessly done or not, has to do with the mystery of one’s own individuality. I believe that there has always been a feeling of love and tenderness between human beings, albeit rare as it involves sacrifice, not of integrity, but of egoism which is a prerogative of the spiritually insecure. My awareness of this and my acceptance of the vagaries of life itself have given my work a continuity and a certain serenity, quite regardless of my own material success or failure.” 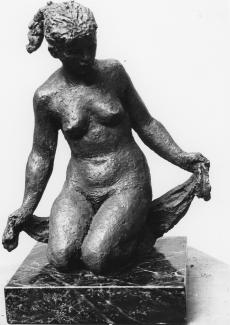