Edith Elizabeth Jukes FRBS, was born in Assam in 1910. She studied at Norland Place School in Holland Park, London from 1918 to 1926, the National School of Cookery for one term in 1928-29, and one term in 1928-29 at the Slade School of Art. She entered the Royal College of Art in 1929 an spend the next four years studying under Herbert Palliser FRBS, Henry Moore and Richard Garbe FRBS, with whom she maintained a professional connection with, as he and Edward Bainbridge-Copnall later nominated her for membership of the Royal Society of Sculptors. She was elected an Associated Member in 1948 and a Fellow in 1961.

During the Second World War Jukes helped with evacuees in Scotland. Upon returning to London, she followed her doctor father into the medical profession by training at Barts Hospital in London, becoming a state registered nurse in 1945. From 1946, she taught sculpture at Sir John Cass School of Art, working there until her retirement in 1975 and pursuing her own practise at evenings and weekends in her studio in Chelsea. Jukes continued her sculpture until she was in her seventies, only retiring from the Royal Society of Sculptors in 1992.

Jukes regularly exhibited at the Royal Academy and, from the 1950s, at the Society of Portrait Sculptors. Initially, she carved in wood and stone, and much of her later work was in clay. She produced portrait heads as well as abstract works. She described how she liked to work: “I’d like to do most subjects twice. First for reality, and then again, but more modern, simpler and with large, easy shapes and forms”.

An unpublished family biography of Jukes is held in the Royal Society of Sculptors archive. 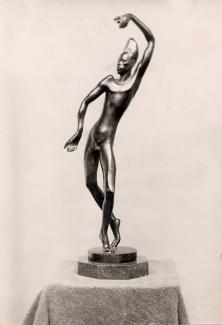