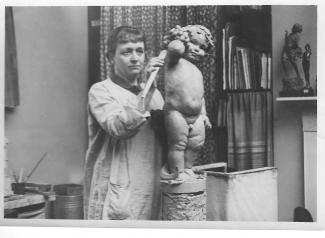 The legacy of a sculptor whose achievements in WW1 still perpetuate

Anne Acheson (1882-1962) was a sculptor, born in Portadown, Co. Armagh. She studied sculpture at the Royal College of Art, Kensington from 1906-1910. Subsequently her bespoke sculptures became popular in many houses and gardens. Her work was exhibited at the Royal Academy and she became the first female Fellow of the Royal Society of British Sculptors in 1938.

Yet her achievements during the First World War are her most enduring legacy. In 1915 Anne joined the Surgical Requisites Association (SRA), an organisation set up to supply surgical dressings for wounded soldiers. However instead of rolling bandages, Anne’s artistic talents led to her pioneering more effective treatments for wounded soldiers.

Next year the Craigavon Museum Services will hold an exhibition in Portadown to celebrate her life and work. For more details contact: museum@armaghbanbridgecraigavon.gov.uk