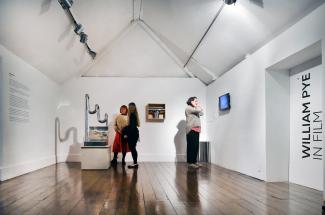 Throughout his career Pye has maintained a passion for film, as he explains: “I realised early on in my career as a sculptor that if I was to be successful I would have to sell my work and consequently be prepared to part with it. This prompted me to photograph everything I made before it passed out of my life. As soon as I began introducing moving water I needed no persuasion to add movie to the ongoing record of my development, to give a better understanding of the essence of what I strive for.”

Pye’s first films were shot using Super 8 film. In 1974 he bought a 16mm camera to make Reflections, commissioned by the Arts Council. “Since then, I have gone through many video cameras, ranging from the huge and clunky to the neat and small,” Pye says.
Making movies has been part of the artist’s life for as long as he can remember “and even before that my father was filming me as a baby in my pram with his Standard 8 cine camera.”