The aims of the Society were cited as, “The promotion and advancement in the United Kingdom of Great Britain and Ireland, and its Colonies and Dependencies, of the art of sculpture and the maintenance and protection of the interests of Sculptors and the elevation of the status of the Profession of Sculpture.”

In recognition of the Society’s services to the art of sculpture, it was granted royal patronage in 1911 and became the Royal Society of British Sculptors.

From the start, the Society has always wanted to educate - in terms of raising public understanding and awareness of sculpture, as well as maintaining professional standards. This educational role has included advising public authorities and private individuals with regard to exhibitions and commissioning. For example, the Society was heavily involved in the post-war efforts to commemorate the fallen and to reconstruct London.

The Society’s educational role was acknowledged in 1963 when it achieved charitable status. During this decade, it was also generously bequeathed Dora House, the historic headquarters it still occupies, by the Dora Charitable Trust which was established by the late sculptor Cecil Thomas OBE FRBS. 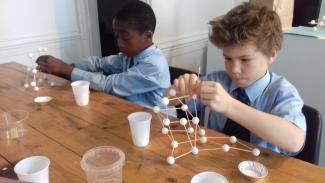 For many years the Society helped organise exhibitions in the UK and overseas but did not put on its own shows. This changed in the 1990s when the Society launched an active exhibition programme, opening a gallery at Dora House and mounting large off site shows. This period of renewed activity attracted artists from around the world and in 2003 the Society recognised its growing number of internationally based sculptors as full members by changing its name and constitution to become the Royal British Society of Sculptors.

Plans for the future

In 2017 the Society activated plans to become a leading centre for sculpture. To make its mark on London’s cultural map, the Society expanded its exhibitions and events programme, extended its opening hours and enhanced the support offered to its members. As part of these changes, the Society launched a new visual identity and was renamed as Royal Society of Sculptors.

The Society has bold ambitions for the future. It is now embarking on an extensive fundraising campaign to enable the revitalisation and restoration of its historic HQ, Dora House.

Dora House is a place where the creative congregate. During its lifetime, it has been a home  - and studio space - for sculptors, photographers, painters, architects and designers.

The architecture of Dora House is highly individual and catches the eye in an area dominated by stuccoed Italianate villas. It is built in red brick with a pair of steep curved gables, classical details in stone in the Flemish manner and tall leaded light windows on three floors.

Dora House was originally built by William Blake in 1820 as a pair of early Georgian semi-detached villas. The ornate frontage dates from a remodelling in 1885-6 to provide a grand studio for Court photographers Elliot and Fry.  The two principal ground floor rooms (the Entrance Hall and the Salon) were enlarged and decorated with plaster ceilings, fine stone fireplaces and strapwork panelling. These elegant rooms would have been hung with paintings by contemporary artists, as Fry was an important patron.

A new north-light studio was also added, with a brochure at the time highlighting the ground floor location which would “prove a convenience…especially to Ladies in Court Dress or other elaborate costume.” 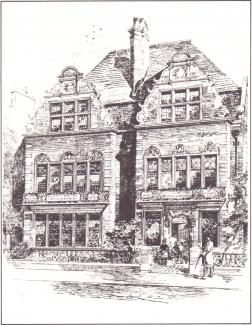 This work was undertaken by a young Scottish architect, William Flockhart (1854 – 1913) who trained at the Glasgow School of Art. Flockhart’s other well-known work in London includes a commission from art collector Sir Edmund Davis: Lansdowne House on Lansdowne Road near Holland Park is a dramatic tower-like block of studios and living accommodation, first occupied by the artists Charles Ricketts RA and Charles Shannon RA.

In 1919 the house was taken on by the sculptor Cecil Thomas (1885 – 1976) who worked here and lived in it as his family home with wife Dora and son Anthony. Thomas’  best known work was in the field of memorial sculpture and coin and medal design. He was commissioned for the tombs of two archbishops, received the OBE for his Coronation Commonwealth Coinage and became a Master of the Artworker’s Guild in 1946.

For some time after the Second World War, the attic floor and part of the first floor were let as an architect’s office to Christopher “Kit” Nicholson (1904 – 1948), whose father and brother were painters.  His partner was Hugh Casson (who became Sir Hugh Casson PRA) who later wrote, “We loved the Dutch house (as we called it) and were very happy there.”

Cecil Thomas clearly loved the house and was responsible for the careful restoration of the front elevation. He set up the Dora Charitable Trust, named after his wife who died in 1967, to protect the long-term future of the house and to fulfill the family’s generous intention to make the house and studio available to the Royal Society of British Sculptors, as it was then called, as it had had no permanent headquarters since its foundation in 1905.  The Society has called Dora House home ever since and the next phase will focus on restoring our beautiful building and creating an exciting space to see, experience and enjoy sculpture.